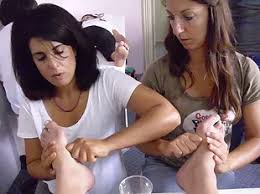 Hagar has been fortunate enough to work on many hundreds of patients presenting a wide variety of disorders. Her particular interest is in the treatment of gynaecological conditions, particularly low thyroid function and associated hormonal disorders such as infertility, endometriosis and polycystic ovary syndrome. Hagar has treated a significant number of women with reflexology throughout their pregnancies, including couples seeking help whilst undergoing fertility treatment such as IVF.

The Greek magazine for reflexologists Harmonization did an interview with her in March-April of 2014. The interview was conducted by Fotis Skourletis.

Tell us some things about you and reflexology.

My story with reflexology dates back to 1988 after having just finished studying Fine Art Painting, in London. I became inspired to join a reflexology course after reading a book by Kevin Kunz and practicing the techniques shown in the book on family and friends. I have always had a keen interest and fascination for CAM therapies, from the esoteric to naturopathic cure. A good friend of mine at the time was also keen to learn reflexology and knew of a reflexologist named Tony Porter. Tony was the then director and tutor for the International Institute of Reflexology (IIR) in London, one of the very few schools at the time offering reflexology training in the UK. I enrolled on the course and completed the training in 1989; this was the significant turning point in my life, from which I have not looked back.
In 1996 I was offered the position of course director and tutor for the IIR (UK), subsequently running their diploma courses for 16 years teaching the Original Ingham Method.

How did you get in touch with Tony Porter, the creator of ART (Advanced Reflexology Techniques)?

My first introduction to Tony Porter was as his student, albeit I was one of 60 in the
class! However the following development formed my personal introduction to Tony,
which established a strong working relationship.
My father suffered from chronic back pain for many years and through my own recommendation became a reflexology patient of Tony’s. The treatments were very
successful and helped to reduce his pain significantly. Just after I graduated from the
IIR, he brought me along to one of his reflexology sessions. He wanted me to work Tony’s
feet as a test to determine if I was good enough to treat him. The idea being that if I
passed, I would take over the reflexology treatments that were helping him so much.
This episode turned out to be my lucky break. Not only did I sufficiently “pass the test”, but
Tony offered me the chance to come and assist him at his reflexology seminars. Tony’s
influence and guidance has helped me forge my own path in reflexology, and over the
last 26 years we have become good friends.

What is the history of ART?

Back in 1972 as a massage therapist Tony Porter became interested in the trigger points
of the feet, there was not then the references available that there are nowadays, so he
adapted his own instinctive approach on working these points with his clients achieving
excellent results. During the same time, through a chance meeting, he was introduced
to Eunice Ingham’s classic work “Stories the feet can tell” which changed his life!
The book ultimately led to Tony meeting Dwight Byers, Eunice’s nephew and Director
of the International Institute of Reflexology. He learned the Ingham Method
of Reflexology and subsequently travelled “on the road” across USA and later on
many other parts of the world, teaching reflexology with Dwight. The original techniques resulting from his experimentation with the “trigger points” were refined.
ART evolved through Tony working on 1000’s of pairs of feet, meeting and swopping
techniques with many reflexologists from across the globe.

What are the main differences between ART and the other reflexology techniques?

ART is the evolvement of the original concept, the original concept being the general thumb and finger walking techniques that most reflexology schools teach. ART teaches effective clinical reflexology, the techniques of which form an advanced complementary approach that can be easily integrated.
There is a huge difference between the generally accepted image of reflexology as a gentle, relaxing, beauty type of therapy, than with that of proper, authoritative, professional, therapeutically effective reflexology that ART teaches.
ART students are taught to continually work from one foot to the other, not working the
feet separately but by working sequentially and in systems. There are many types of contacts learnt in ART using thumbs, fingers and the medial surface of knuckles. The type of pressure used is determined on the client and the condition of the reflex, which in turn
influences the technique used.
ART teaches how to detect, interpret and treat ‘disturbed’ reflexes in the feet. There are many types of applications taught, the beauty of ART is that it is continuously evolving. No technique can be “owned”, each person takes away what they need from ART and it grows with them within their practice.

What are the advantages or disadvantages of ART for the reflexologists, if you find any?

ART requires less time for clinical reflexology treatments, which is an advantage, as well as having a beneficial outcome for the client. The ART practitioner is not static; a chair on wheels is required to work from the side and also with the capacity to move the seat up or down when needed. Correct posture is of paramount importance, especially the way a
reflexologist sits while treating for his/her wellbeing as well as the clients. The techniques are taught in such a way that the thumbs fingers and knuckles have the correct support,
saving the practitioner hands for a long and productive career.

Tell me some things about reflexology in the United Kingdom nowadays.

Reflexology has grown in popularity, though I would say it is still generally perceived as a “spa” relaxation therapy than an important advancement in the health field. However Reflexology is positively growing within the voluntary services of the medical environment such as in the National Health Service (NHS) hospitals and hospices.
Some NHS Trusts will fund reflexology for certain conditions, although currently NHS access to this therapy is limited and most patients pay privately for treatments.

What about the studies and the requirements in U.K.?

Reflexology is not regulated in the UK. It is possible to train for 16 hours or 150 hours (depending on qualification and/or school) become insured and start to practice legally! It is an uneven playing field and subsequently there are many reflexologists practicing within varying levels of skills and competency. Level 5 is the highest standard of reflexology training in the UK with a minimum of 150 hours spread over 12 months duration. A minimum of 100 treatments for case studies are required. Level 5 is the only course in the UK fully compliant with the Reflexology Core Curriculum.

Hagar will be teaching her two day course of reflexology for women’s health in February and November 2018 in the Hague, the Netherlands.
February: https://floortuinstra.nl/en/event/reflexologie-voor-de-gezondheid-van-de-vrouw-hagar-basis/
November: https://floortuinstra.nl/en/event/reflexologie-voor-de-gezondheid-van-de-vrouw/